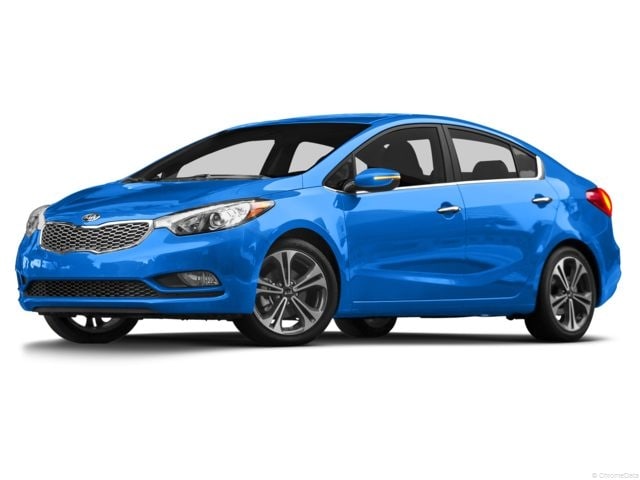 The 2014 Kia Forte has already received a lot of fanfare with Kia hyping its debut. You’ve seen all the commercials at the Super Bowl, but now the 2014 Forte has arrived at Waikem Kia in Massillon, Ohio.

Kia took a major step to upgrade the design of the Forte, and combined with a great warranty and great features, Kia took a necessary step up in a popular, crowded field.

You have to start with styling when you talk about the Forte. The Forte is much improved on the outside. It’s 2 inches wider in the wheelbase, an inch wider across, and lower. Also, you’ll notice the LED lowbeams, new alloy wheels, and the side moldings that stretch up and down the vehicle.

The tiger nose front grille is reminiscent of other Kia models, including the Kia Soul and all new Kia Cadenza.

Under the hood, your 2014 Kia Forte has a new 4 cylinder engine that gets up to 201 horsepower. Kia put the effort into making the Forte a more quiet ride. On our first test drive, we thought the ride was quieter, and then when we checked the specs with Kia, they mentioned the efforts to make this a more quiet vehicle.

You can get a Forte in 9 exterior color choices and 3 fabric and color choices inside. WardsAuto has voted the 2014 Kia Forte on the Top Ten Interiors.

We think beyond the style, you will enjoy the more quiet ride you get with your 2014 Kia Forte.

When you talk about any Kia model, you have to talk features. Across the line, Kia does a great job of giving consumers a lot of great standard features that would usually be extras on a competing model. The Forte is no different, as standard features include Steering Wheel Audio Controls, Bluetooth, and USB Interface that allows you to play the iPod or MP3 player through the speaker.

If you are looking for the extras, you can get a 2014 Forte with Navigation, backup camera, heated leather seats, a sunroof, and Eservices – a digital vehicle diagnostics system.

What Others Are Saying:

“The Forte is Kia’s offering in the competitive Compact market segment. Attractive styling, pricing and feature content are what make this car standout.”

One element that does stand out, though, is how quiet this car is in operation. Interior noise was an issue with the outgoing car, but the engineering team has tamed that gremlin on the new model.

We think Kia took a major step forward with the 2014 Kia Forte. If you are ready to see this redesigned Forte in person for yourself, get a quote, or call us at 330-478-0281. You can also visit Waikem Kia in Massillon, Ohio.